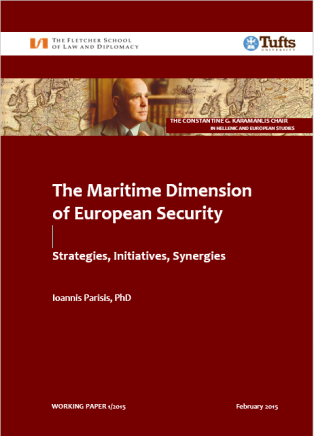 «The Maritime Dimension of European Security», by Ioannis Parisis, PhD, has been published by The Constantine G. Karamanlis Chair in Hellenic and European Studies at The Fletcher School of Law and Diplomacy, Tufts University (Boston, USA).
You can find it at the official site of The Fletcher School, here: http://fletcher.tufts.edu/KaramanlisChair/Publications-and-Resources, as Working Paper No.9, February 2015
or directly at:
http://fletcher.tufts.edu/~/media/Fletcher/Microsites/Karamanlis%20Chair/Docs/KARAMANLIS%20%20Working%20Papers%202015%20No%201.pdf