Just 210 years after the end of the 1st Barbary War and the Battle of Derna, a stronghold of the Pasha of Tripoli, the port city of Derna is today a stronghold of Islamic extremist groups affiliated to ISIS. 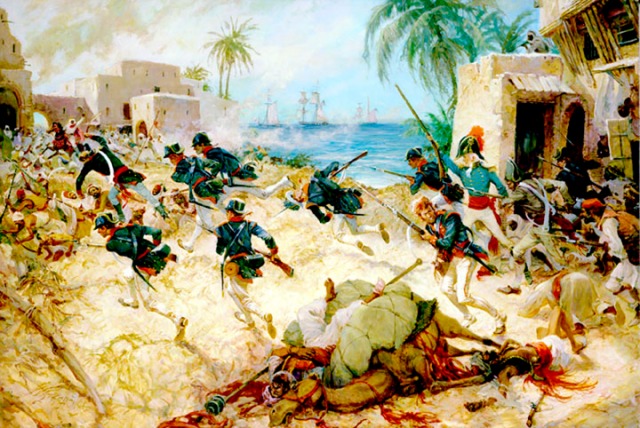 Attack on Derna, by Charles Waterhouse. US Marines and Greek warriors (on the right) In the depth the US warships Argus, Hornet, and Nautilus

Illegal actions at sea have a history as long as ships have gone to sea, in particular piracy and armed robbery against ships. From the Caribbean, to the pirates of Barbary Coast in Northern Africa. The protection of shipping from Barbary pirates in the late 18th and early 19th centuries, was of the first maritime security operations in the Mediterranean Sea.

The two Barbary Wars were fought in 1801-05 and 1815 respectively, by the United States Navy against the “Barbary states” – the petty North African Ottoman provinces. They were the first overseas wars fought by the United States. The reason was to ensure the maritime security, especially the secure sea lines for the merchant ships of the United States in the Mediterranean basin.

Very few Americans, and hardly anyone in Greece know that, when the Marine’s Hymn is sung, it actually lauds and celebrates the very first Greek-American military cooperation that took place in 1805 and resulted in the release of 308 Americans -the frigate  Philadelphia’s  crew-    held hostages for ransom by Mediterranean pirates.

Professor Joseph Roucek notes: “To all intents and purposes, America entered the Mediterranean with the launching of the North African campaign in 1942, although history shows that racket-smashing was Decatur’s mission when he went to the harbor of Tripoli in 1804. Reference to «the shores of Tripoli» in the Marine hymn is a recognition of the role of the U. S. Marines in these campaigns.” (“The Geopolitics of the Mediterranean” by Joseph S. Roucek, American Journal of Economics and Sociology, Vol.13, No.1, Oct. 1953).

“From the halls of Montezuma, to the shores of Tripoli, we fight our country’s battles in the air, on land, and sea”, run the first lines in the United States Marine’s Hymn. The reference to American marines action on “the shores of Tripoli” commemorates a US marine attack on a stronghold of the Pasha of Tripoli (the capital of Libya today), who along with the rulers of three other petty North African Ottoman provinces (Morocco, Tunis and Algiers), practiced piracy against commercial shipping in the Mediterranean, in the 17th and early 19th centuries.

Known as the Barbary pirates, these tribal autocrats sent their sailing ships, known as corsairs, to attack merchantmen for loot and to capture sailors and travelers whom they held for ransom. The Americans who were commercially active in the Mediterranean, suffered numerous humiliations at the hands of the pirates, and were forced to pay substantial amounts of tribute to them. The problem for the Americans was to protect shipping from Barbary pirates in the Mediterranean. But disputes over the amount of tribute to be paid to the Barbary States had led to war – the so called “Tripolitan War” or “First Barbary War” of 1801-05.

In spring 1801, President Jefferson ordered a blockade of Tripoli’s port but didn’t officially declare war. Over the next few years, the American navy maintained a military presence off the coast of Tripoli, trying to put a stop to pirate attacks with limited success. In 1803, during the third year of the First Barbary War, an enlarged US squadron was sent to the Mediterranean under the command of Commodore Edward Preble. On the 31st of October 1803, one of Preble’s ships, the frigate Philadelphia, ran aground on a reef near the harbor of Trpoli. Captured by Tripolitan gunboats, the frigate was floated free and taken into port. Captain William Bainbridge and the 307 crew were imprisoned, and the Pasha of Tripoli was asking for $200,000 for their release. 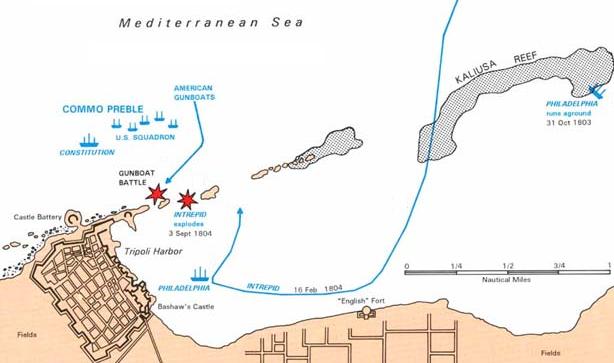 On the night of February 16, 1804, Lieutenant Stephen Decatur led a small contingent of the U.S.’s first Marines in the captured Tripolitan ketch rechristened USS Intrepid, to deceive the guards on board Philadelphia and float close enough to board the captured ship. Decatur’s men stormed the vessel and overpowered the Tripolitan sailors standing guard. With support from American ships, the Marines set fire to Philadelphia, denying her use to the enemy.

A subsequent naval attack against Tripoli in July 1804 resulted in a series of inconclusive battles. In the fall of 1804, the former American consul to Tunis, William Eaton, a former army officer, returned to the Mediterranean, deciding to act. He persuaded President Thomas Jefferson that neither bombardment nor a blockade would yield results and that only a land attack on Tripoli would force the Pasha’s hand. Eaton’s plan, accepted by Washington, called for an alliance with the pretender to the Tripolitan throne, who was in exile in Egypt, to aid him militarily to overthrow the Pasha of Tripoli.

The Battle of Derna

A detachment of nine Marines under the command of Lieutenant Presley O’Bannon were sent to help Eaton. William Eaton led a mixed force of US marines and Greek, Arab, and Berber mercenaries marched across the desert from Alexandria, Egypt to assault and to capture the Tripolitan heavily defended port fortress of Derna. Departing Alexandria on March 8, 1805, the column moved along the coast pausing at El Alamein and Tobruk. Their march was supported from the sea by the warships USS Argus, USS Hornet, and USS Nautilus under the command of Master Commandant Isaac Hull. The most reliable contingent other than the Marines was a company of 40 Greeks, fully armed and led by two captains.

On April 27, 1805, Eaton’s army made an epic march across the Libyan desert from Egypt and stormed Tripoli’s second most important city, Derna. Grabbing a musket, Eaton personally led his men forward and was wounded in the wrist as they drove the defenders back. By the end of the day, the city had been secured and O’Bannon hoisted the flag over the harbor defenses. It was the first time the US flag had flown over a foreign battlefield.

The Battle of Derna and the Eaton’s campaign is described in detail in the book of David Smethurst «Tripoli: The United States’ First War on Terror» (2006). The implementation of Eaton’s plans is also detailed in his papers and correspondence, which Professor Harry Psomiades, Director of the Centre of Byzantine and Modern Greek Studies, Queen’s College (Flushing, New York), made public in 1977.

The fall of Derna alarmed the Pasha of Tripoli who compromised with the Americans and released the prisoners. However, President Jefferson conducted secret negotiations without Eaton’s knowledge and paid $60,000 for the release of the prisoners. Washington also signed a peace treaty with him. In agreeing to pay a ransom of sixty thousand dollars for the American prisoners, the Jefferson administration drew a distinction between paying tribute and paying ransom. At the time, some argued that buying sailors out of slavery was a fair exchange to end the war. William Eaton, however, remained bitter for the rest of his life about the treaty, feeling that his efforts had been squandered by the State Department diplomat Tobias Lear. Eaton and others felt that the capture of Derna should have been used as a bargaining chip to obtain the release of all American prisoners without having to pay ransom. Eaton accused Washington decision makers of «betrayal,” submitting to a «dishonorable peace” and for the «stabbing in the back” the American fighting men who had risked their lives. 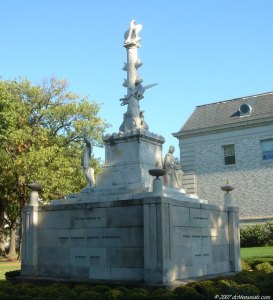 The «Tripoli Monument». The oldest military statue in the United States (Carved in 1806) Located at the U.S. Naval Academy Annapolis Maryland

The Battle of Derna cost a total of fourteen dead and several wounded. Of the force of Marines, two were killed and three wounded. Tripolitan losses were estimated at 800 killed and 1200 wounded.

This first Greek-American military venture is now immortalized in the Marine Corps Hymn. In addition, according to the Uniform Regulations of 1826, Marine Corps officers have worn the «Mameluke sword» in commemoration of 1stLt Presley O’Bannon’s assault on Derna, deriving its name by the cross-hilted, curved, scimitar-like sword deriving from sabres used by Mameluke warriors of Egypt. A sword of this type was presented to O’Bannon by the Ottoman Empire viceroy, Prince Hamet of Egypt, on December 8, 1805.

The US Marine Corps «Mameluke Sword»

Of the Greeks little else is said except that the Americans evacuated them to Sicily. According to Professor Psomiades, the Greeks were members of organized military companies that offered their services to the British, French, Americans, Russians and even the Ottomans. He speculates that this particular group was probably from the Peloponnese and had fled to North Africa after the Russian-supported 1770 Greek revolt against the Ottomans failed. He notes that they fled Greece to escape Turkish tyranny and who fought for their living. They were probably guerrilla fighters known as «kleftes» or «armatoloi,» who would soon lead the 1821 revolt against the Turks.

In his report Eaton cites the number of casualties his army suffered. In addition to the Marines, he notes that the rest were «chiefly Greeks, who in this little affair, well supported their ancient character.” He also notes that the Greeks had saved the whole operation, including his own life and that of the Marines, when prior to the attack, some of the Arab recruits conspired to rebel, kill the Americans and steal the war chest they were carrying. Fortunately the Greeks got wind of the conspiracy and neutralized it.

It is true that the Greeks were mercenaries who were paid for their services. However, they could have just as easily sold out the Americans for more money by allowing the Arabs to kill Eaton, O’Bannon and their Marines. Their Greek «filotimo” or honor did not allow betrayal, something the Marines, at least, appreciate.

(*) The Academy for Strategic Analyses (ASA) is an independent non-profit scientific and research institution, based in Athens. (www.acastran.org)